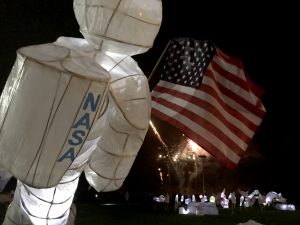 Did the weather dampen the enjoyment of yet another Boxford Fireworks Event? Judging from the comments received after the event, no it didn’t.

This year, those that built the lanterns excelled themselves, producing masterpieces themed on the 50th anniversary of the heroic first landing of men on the moon.

We were treated to a parade through the village led by the Glenmoriston Pipe Band, who regaled us further on the Playing Field with a wonderful marching display, whilst playing drum and bagpipe tunes familiar to many of us.

Fireflow delighted us with their stunning Firedancers, captivating us with their unusual extraordinary entertainment. They really do seem to enjoy their Firedancing performance and creativity, helping to make this year’s event one to remember. Should we hire them again? You tell us! 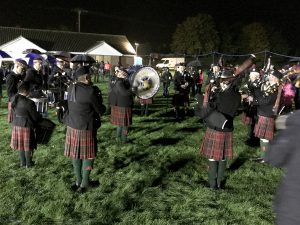 As for the fireworks themselves, just how do Dynamic Fireworks make their display better year on year? Introducing the ‘fan-shape’ firework for the first time this year was absolutely brilliant. With the ignition of the fireworks being synchronised with the tone and volume of the music, the choreography could not have been bettered by the Strictly team.

In 2014, after a break of some years, the Boxford Fireworks Event was reinstated. The team suggested lessons were learnt from that event and endeavoured to improve the event in the future. That they did so has been evident over the last few years and none more so than this year.

The team of volunteers who helped produce the event must be thanked for their efforts which started many weeks before the night of the display itself. We’d love to have yet more volunteers please.